What's in a name?

When the announcement was first revealed around April 1 of this year, I organized a petition drive and have been an outspoken critic of the University’s decision, along with a number of other local area legislators. I’ve written an Op-Ed for the Washington Post, co-authored a letter to State Council on Higher Education in Virginia, and made the trip to Lexington, Virginia for the Council’s May meetings to testify at the Academic Affairs Committee and the full Council about my concerns.

I did all this under the belief that SCHEV had the final say in the re-naming of the law school.

Although supporters of the name change have questioned my motives and called me a knee-jerk liberal, my motivation for championing this fight was and remains a genuine concern for the reputation of the law school, the university, and the Commonwealth.

I continue to be concerned that, in exchange for this $30 million purchase price, the school has done irreparable harm to its reputation that will result in declining enrollment, forcing them to become less selective, which will lead to declining school rankings which will only reinforce this downward spiral.

The grant agreement leaked online shows that, in addition to renaming the law school, GMU must hire twelve additional faculty members and create two new centers expanding its law and economic focus. They must reapply for the grant every year, and the Koch Foundation must be notified immediately if Dr. Henry Butler steps down or is removed as dean of the law school.
To SCHEV or Not to SCHEV?

In spite of all of this, SCHEV staff, based on advice they received from the Attorney General’s office, decided this week that the name change was honorific and therefore would not require their approval.

According to the SCHEV staff’s initial recommendation, they did have a role ensure that new instructional units are implemented appropriately relative to the inherent soundness of academic and fiscal commitments involved.

The law school industry, such as it is, is in a crisis. Applications to law school have decreased some 50% since their peak about a decade ago. The nation’s elite law schools are reducing class size, and not growing, in response to the shortage of applicants. In order to grow, the law school to the size it would need to be to sustain the new programs it is required to create under this contract to rename the school, particularly given the number of high quality students who are likely to be dissuaded from applying because of the name, GMU will have to accept students with lower LSATs and grades. This once again begs the questions of fiscal soundness of the University’s plan going forward.
Money & Influence

Virginia taxpayers contribute ten times more in each biennial budget than this gift would account for. These grant agreements would give the donors, or purchasers of the naming rights, outsized and inappropriate influence over the direction and decision making at the law school.

Dr. Cabrera has said at various times that the academic freedom of the law school and of the University is not at risk, as the purchaser price amounts to mere 0.6% of the Schools budget. At the same time, University and Law School officials would ask how such a large and significant investment in the law school could be refused.

Whether the gift is too big to come without strings that affect the Law School’s academic freedom, or so small that it really doesn’t make a difference, we should feel comfortable that it is in our best interest to say no to the offer to purchase the law school at George Mason University.
Moving Forward

At this point there don't seem to be many options under existing law to prevent the name change from going forward. However, there may be legislative options to clarify SCHEV's role in this process and make certain there is a process to prevent large donors from using our public colleges and universities as a platform for their personal agendas. So, while it may be too late to for this law school, there is an opportunity to take preventive action to protect the integrity, fiscal soundness, and overall perception of the rest of Virginia's higher education system.
Posted by Delegate Marcus Simon at 6:21 AM

I want to take a moment to let you know about a Virginia state tax credit that its available to you and benefits a local organization right here in the 53Rd House of Delegates District.

I'm happy to report that the Virginia Department of Education recently awarded the Falls Church-McLean Children's Center (FCMCC) over $100,000 in tax credits to make available to their donors. Now, businesses and individuals that donate to the Children's Center can take advantage of this credit while contributing to an organization located in our community!

Virginia residents or businesses that make a charitable gift of a minimum of $1,000 to the Falls Church-McLean Children’s Center this spring will be rewarded with a remarkable VA Tax Credit worth at least 65% of their donation and a reduction in federal taxable income for their 2016 tax returns.

The combined VA Tax Credits and decreased taxable income cut the ultimate cost of the minimum $1,000 gift to just $191, depending on your individual tax circumstances.

I know we hear a lot about tax credits that seem to benefit the people that need the help the least, or function as a form of corporate welfare.  SO I wanted to make sure you knew about this credit that can be used my many of us here in the 53Rd district to help a worthy organization located in our district. 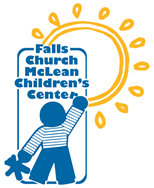 Earlier this year, the Virginia Department of Education awarded the Children's Center tax credits to pass on to businesses and individuals that make a minimum $1,000 sponsorship donation. This is a great way to help more children at a lower cost through this tax credit.

The Center is having their 4th Annual Teddy Bear 5K & 1K in September of this year, which is the perfect sponsorship opportunity. To put the tax credit in perspective, here is a chart showing the effects of the tax credit and your donation. 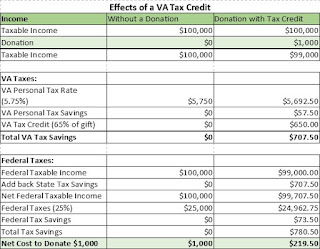 Sponsorships must be paid before June 30, 2016 to receive the tax credit.

For more information about FCMCC, please check out their website and Annual Report.

To learn more about the Teddy Bear 5k, sponsorships and, the available tax credit, contact Renee Boyle, FCMCC Development Director, at (703) 534-4907 or Renee_Boyle@FCMLCC.com.
Posted by Delegate Marcus Simon at 6:21 AM

After sending my email update last week, I sent a formal letter to the SCHEV Board asking them to seriously consider the impact of renaming the GMU law school and its long term effects on the school. I also shared the list of over 1,200 petition signatures. Thank YOU for helping make that possible.

You may have seen the recent news report releasing the demands and stipulations attached to the Koch brothers donation to GMU. The National Law Journal has picked up the story, including information about the letter I sent and our petition.

The donation agreement leaked online shows that, in addition to renaming the law school, GMU must hire 12 additional faculty members and create 2 new centers expanding its law and economic focus. The provisions also require that the Koch Foundation be notified immediately if Dr. Henry Butler steps down or is removed as dean of the law school. The New York Times was the first to publish the leaked agreement.

It is clear that stipulations like this erode the school's academic independence and will most assuredly have an impact on the university's reputation.

Please forward this email to your friends and neighbors and ask them to add their names to the petition as well!

A Washington Post article from earlier this week highlights the controversy among GMU faculty and the school's administration. Several faculty have been outspoken in their opposition, posting an open letter expressing their concerns. The letter now has over 160 faculty signatures. At a faculty meeting yesterday, they adopted two resolutions relating to the potential renaming citing grave concerns about conflicts of interest relating to the donation agreement's stipulations.

As I mentioned in my last email, SCHEV's next Board meeting will be on May 16th and 17th at Washington & Lee University. I intend to be at the meeting, speaking with individual members if possible and to offer comments during the public comment period.

The public comment period will be on May 17th at the beginning of their agenda at 9:00am. The formal agenda will be posted on SCHEV's website one week before the meeting.

Posted by Delegate Marcus Simon at 6:35 AM